December 6 - What was your favourite gift given and/or received in 2012? (Thanks again, Hope, for the prompt.)

One I thought was found dead in the street.  Cassie and I were rushing out the door to catch a flight to Washington, DC, to meet her sisters and clean out her late mother's apartment.  We saw whom we thought was Pegasus, dead and bleeding from the mouth.  We wrapped the dead cat up and put him in a cooler and let our friends know what happened.  All weekend we thought we'd lost Pegasus and dreaded our return.  When we got home Monday morning, all four of our cats appeared, including Pegasus.  It was miraculous.  So who was the cat that we found two days before?  We'll never know. I brought the dead cat to the veterinary and asked them to give the animal a proper burial.  However, I will never forget the gift of realizing that Pegasus, whom we thought was dead, is alive.

One night in September, Cassie informed me that our friend Michel had appeared in tears with a cat cage bearing Sabrina, his late father's cat.  Another black cat, a longhair (we have had all shorthairs,) who had been abandoned since Michel's father's passing.  He couldn't keep her as Ralph, their dachsund, wouldn't have it.  Sabrina was clearly traumatized and spent most of the first two weeks with us in the cellar, though occasionally we would catch "Sabrina sightings," as she ventured upstairs for food.  She had one eye which looked like it had cataracts but the vet later determined to be scar tissue (he also cleaned her teeth.)  Gradually, she became more and more acclimatized and now Sabrina is our only lap cat.  I haven't had one like this in years.  She still mostly keeps to her living room sofa, but every day makes some sort of friendly appearance and explores a little more each day it seems. 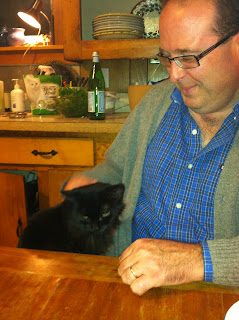 This week it looked like we might lose Tibbs, who is Cassie's favorite.  He is something of a fighter, somewhat aggressive and with a heart.  He sleeps under the bushes along the driveway and yowls at us when one of us pulls up in a car.  He likes to get into cars too.  I thought I would be writing his obituary as he is diagnosed with feline leukemia and has been low energy with an undetermined infection, however, he is spending the night at the veterinary hospital and we are optimistic about his feeling better in the days ahead.  Another gift.  Nevertheless, I believe we have enough cats.  ;)

Pegasus and Tibbs know what they want: 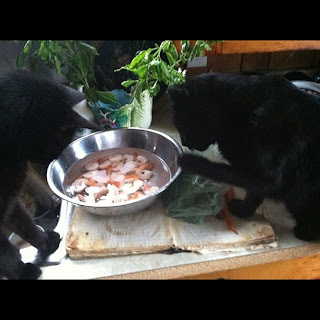 Aldous Huxley famously wrote, describing his advice to an aspiring novelist: "“My young friend,” I said, “if you want to be a psychological novelist and write about human beings, the best thing you can do is to keep a pair of cats.” And with that I left him. I hope, for his own sake, that he took my advice. For it was good advice — the fruit of much experience and many meditations." However, what he goes on to say is the psychology cats reveal is not always so pleasurable; in fact, he describes many "sermons of cats" as "depressing."  I suppose I've given up the novelistic aspirations, if I ever had any, though I do enjoy the privilege of these spiritual beings' care and company.

December 5 - Five things you do not want to forget from 2012? (Prompt from Hope)

1. My joyful surprise at Cassie's successful surgery, happened just as the doctor said it would.  A skilled surgeon would know how and why, though for me something incomprehensible accomplishes the healing and I want to remain forever grateful.

2. Hannah singing the national anthem, rising to the occasion a couple of days after she was hospitalized with an infection.  Driving her to the event she was having difficulty finding the right key, and then she calmly, unflamboyantly settled into it.

3. An abundant garden where one had not grown recently, flowers and vegetables, surprise upon surprise day following day.  Though I've loved fresh tomatoes ever since I can remember, the real gift was the eggplant, which reportedly are hard to grow.  A reminder of the abundance of life and water and soil and sunlight and growth.

4. Meeting Helen in person.  We'd begun a correspondence through the We Love Gratitude website.  I admire her faith, perseverance, humor and colorful way of describing people and events.

5. The Inspiring Women project, even as it feels unfinished ...
Posted by Garrett at 3:30 PM No comments:

Thanks again to Hope for the prompt, Did you discover a favourite song or musical artist in 2012?

James Blackshaw.  I like the solo guitar style made prominent by John Fahey, Leo Kottke, Robbie Basho and others I'm probably not familiar with, and Blackshaw's work seems like a worthy extension of that idiom.

Here is a video of Blackshaw playing on the street.  I'm not sure of the date, it was probably filmed in the past few years, the sounds of the street complement the guitar playing.  I also like when he dryly says "Cut" at the finish.

The Broken Hourglass is another performance that resonates with me, I listen to it a lot and love the emphasis and dynamics.  It's a big sound and at the same time there's a lot happening.

There's also the Cloud of Unknowing.  Blackshaw has an album of the same name though I like this live version a little more, it has a staccato quality in some places not heard in the other.

Hard to choose since there's so much of his work that I like, but here's Boo, Forever.  I don't know what the instrument is that accompanies him in the final minutes.

Why?  Something about his playing changes something in my being, I'm not sure what it is.

Posted by Garrett at 5:42 PM No comments:

This one's not so much in response to a prompt, although I thought of Hope's "storm" theme for today.

Looking back on the past year, not only did I not write much, I forgot my own advice in this blog's title.

I depend on an uncountable number of people each day, particularly in my job.  Plans that I made and expected colleagues to help with did not come about, for reasons that became clear to me later on, but at the time paranoia and resentment clouded my thinking.  I was unwilling to give others the benefit of the doubt and not "take it personally."  Furniture and appliances were not delivered, no one would explain, and I became hostile and non-communicative.

The ice may have melted when I was in the process of writing an accusatory email and then I realized that it said more about it me than its intended recipient.  Where were my priorities that I would take the time to send a "nastygram" instead of focusing on what needed to be done?

So as the moments arise, each out of each, I want to take things more lightly, that maybe what I think must be said in the moment doesn't need to be.  It can wait.  Or it won't matter.
Posted by Garrett at 5:29 PM No comments:

December 2 - What was the most memorable gathering you attended (or held) in 2012? 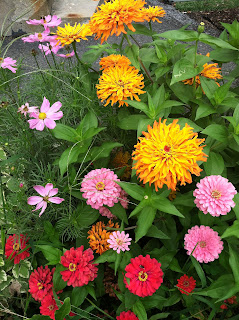 Taking the prompt again from Hope again, I think of the past 4th of July.  Cassie and I hosted our family, which this year included Andrew, my brother, Chloe, his partner, and Leon, Alan and Simon, three children all six and under. I don't see my brother often.  It was Cassie's stroke of genius to buy a plastic wading pool for the kids.  Especially meaningful was that the year before we were out of the house because of construction, with no certainty when the house would be fixed or when we would return.  This year, we enjoyed bright sunlight, several outdoor gatherings and a flourishing garden which yielded many vegetables and flowers.  Oliver, our neighbor, remarked that nothing had ever grown in that soil that he could recall.  The 4th has special meaning for Cassie as it was her late father's favorite holiday. It was a summer to remember, especially with the yield from the garden.  Home is especially grounding for Cassie, so to speak.

When I reflect on 2012, not finishing what I’ve started comes to mind, for example on this blog, which has been untouched for nearly a year.

I took an online course for the first time, if what I remember is accurate. The theme was self-confidence and it occurred over four weeks.   I took every opportunity I could to participate in the chats, read, do the exercises, work with a buddy, with the end result a personal mission, vision, core values, and goals,  a gift which I have not opened since the course ended.  And I hesitate to start anything new.

Yet I am delighted to see others posting to Reverb12 and feel something awakening in me, though I'm not sure what it is.

Posted by Garrett at 1:23 PM No comments:

I love Rachel’s Daily Pep Talk from a Best Friend and look forward to it. Rachel describes the site as “daily affirmations that don't suck.”

Mostly these consist of positive, encouraging and motivating messages. Here’s one to counteract stress and focus on a goal. Another reminds us that each of us can express creativity. Then there’s one that urges you to trust yourself and remember where you’re the expert and need not heed criticism or instruction.

When someone shares an accomplishment, Rachel gives a shout out, another aspect of affirmation that may inspire others in their own pursuits and reflective of the author’s generosity and kindness.

A great thing to do is subscribe to Rachel’s pepcast via iTunes and let her uplifting words enter into you through an auditory experience. Here’s a shining example. The site also has a “Random” link for those who like surprises. Here’s one I got to just now.

I look forward to seeing Rachel’s newest creations in my feed reader and always get a lift. Thank you Rachel!

Posted by Garrett at 5:16 PM No comments: